The next couple turns move by quickly. I spy a goody hut in 3920BC and head towards it. Pop the hut in 3840BC and get experience from it:

Well, well, well... there's something you couldn't get out of a hut in Civ3!

The hut grants my warrior 5 experience (XP), which is enough to pick two promotions. In Civ4, your units can pick a promotion at 2XP, 5XP, 10XP, 17XP, and so on, though getting more than 20XP with a single unit is extremely rare. Different units get access to different promotions, and certain promotions are prerequisites for other promotions; for example, you can't take City Raider II until you have City Raider I. Here are the three choices I get with my warrior with his new experience: 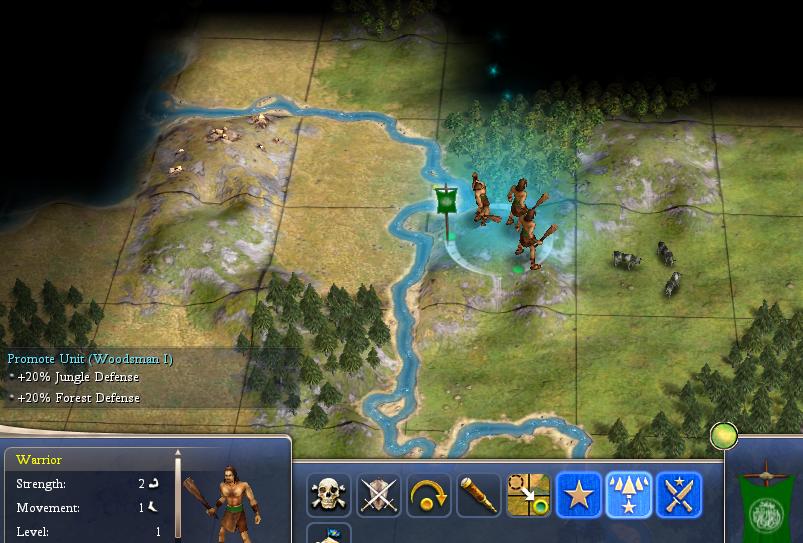 Oh yeah, units glow when they have access to a promotion, I should mention that. I can choose from Combat I (+10% overall strength), Woodsman I (+20% defense in forest/jungle), and City Raider I (+20% City Attack). City Raider probably wouldn't be a good choice here, since I don't plan to attack any cities with this unit. And while the Combat I line of promotions is never a bad option, I'll get more benefit by taking Woodsman I and then going on to take Woodsman II, which will grant my warrior 2 movement in forest and jungle tiles. Basically, the warrior can move twice each turn instead of once so long as he's moving through forest, which is exactly what I want in a scouting unit. I go ahead and do that, and then move my newly promoted warrior twice. Promotions are fun! 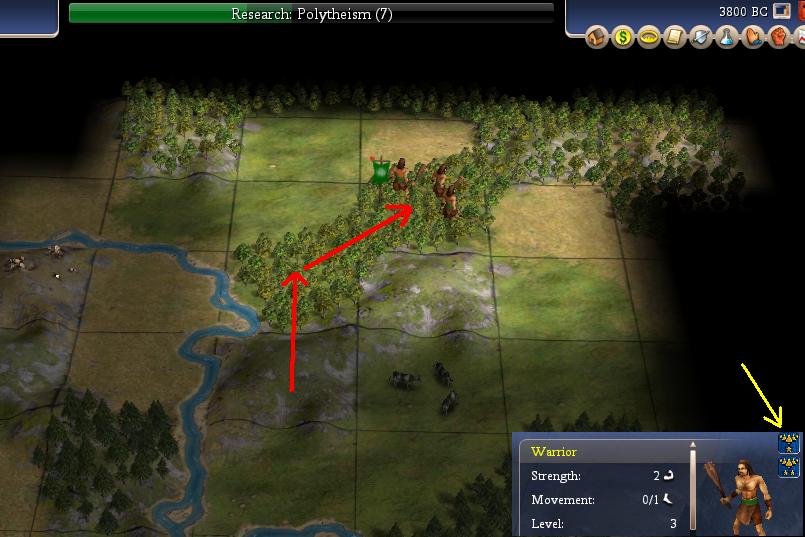 There he goes! I marked out the path in red, and also note the little promotion icons next to the unit's picture. That helps you keep track of which unit has which promotions; you can also mouse over the unit to get this information. My Woodsman II warrior spends the next couple of turns zipping around the map, sticking to the forests to keep moving along at a good speed. Mecca's borders expand from the palace's culture in 3760BC, revealing another horses and an ivory resource just out of the city's radius. Ack! Well, have to put another city to the east to grab them... On the next turn, my scouting warrior finds the Egyptians to the north! 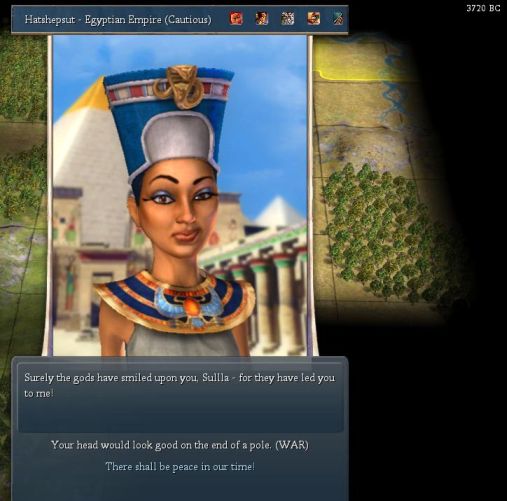 Hatshepsut is Cautious towards me, not surprising given that we've got no pluses or minuses from diplomacy as yet. Notice that there's only two diplomatic options at the moment: declare war or maintain peace. That's it! You have to research certain techs to be able to trade techs or trade gold with other civs. No one's going to be running 0% research out of the gate in this game!

Since I can't do anything else, I pick the peace option and send my warrior on his way. Also keep in mind that I can't enter Hatshepsut's territory to scout it out without declaring war, so I skirt her borders for now. Borders mean a lot more in this game than they did in Civ3.

In 3640BC, Mecca completes its warrior and I get another pop-up message: someone has already founded the religion of Buddhism! 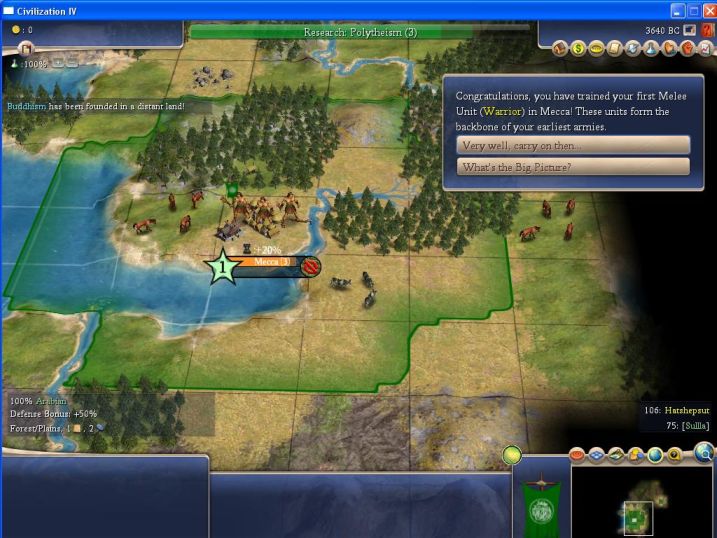 Probably a good thing I didn't try to go after that religion then, heh. The tech for Buddhism (Meditation) is cheaper than the one that enables Hinduism (Polytheism), but if you miss Hinduism you have a decent chance to get Judaism by researching the tech Monotheism. Buddhism is more of a cheap, one-shot deal. I went with the safer bet here, and hopefully it will pan out. We'll find out in 3 more turns. Incidentally, the fact that most Spiritual civs (like my own Arabs) start with the tech Mysticism allows them to begin researching a religion right out of the gate. That's almost as big of an advantage as the lack of anarchy that Spiritual civs enjoy. If you want an early religion - take a Spiritual civ. As to what the Philosophical trait does (my other trait as Saladin)... we'll get into that a bit later. For now, I fortify the new warrior in Mecca and start putting some shields into a barracks.

Meanwhile, my scouting warrior has found another goody hut in the east. This one gives me a map (eh, not so great) but it does reveal that I should push north and east with my scout. Looks like I have a bottleneck of land to the south; I'm fairly close to the southern tundra. I'll have to push north therefore to grab the land in that direction before Hatshepsut takes it. There's also room for a dynamite city to the east, one with fish/clams/wheat all present. I have plans for that down the road...

The next turn my warrior finds a lion out there in the wilderness. Yikes! 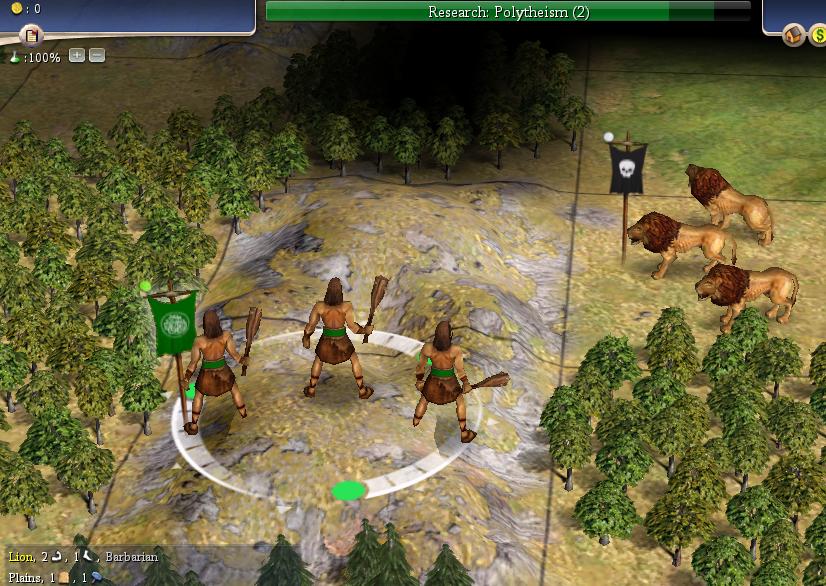 I zoomed way in to take that shot, partly to show that you CAN do that in Civ4, also partly to show better what the lions look like. Despite what some proponents of doom posted on the public forums, these barb animals are not the end of the world.

They can eat unguarded units (settlers and workers) if you send them out in the fog, but combat units will rarely be taken out. I move my warrior northwest then northeast, daring the lion to take him on. Hey, he'll be defending in forest (+50% defense) and since he's Woodsman II, he'll get another +50% bonus on top of that. I am not afraid.

Between turns the lion attacks, and uh, wow, he did some damage. 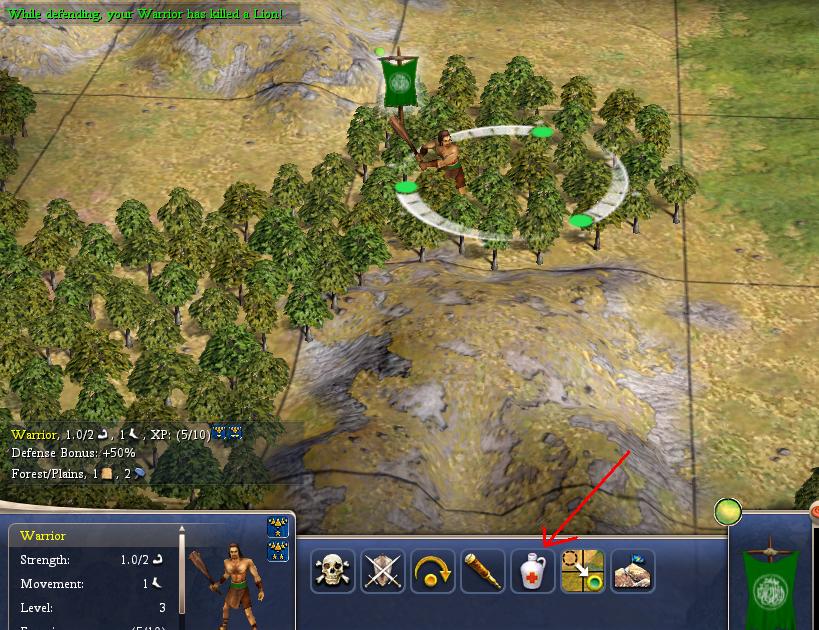 My warrior has been cut to half strength (1.0 out of 2). This was an extraordinarily bad roll of the dice for me; usually the warrior unit would be undamaged or have little more than a scratch. I'm going to have to stop and heal him now to make sure he doesn't get killed. See the little medical icon? That tells the unit to "wait until healed"; it will take 5 turns to heal completely, hmmpf. Units heal faster in your own borders than neutral territory, and even slower in foreign territory. Nothing to do but wait it out here for now though.

On the plus side, I was the first to discover Polytheism and thus found Hinduism in Mecca. 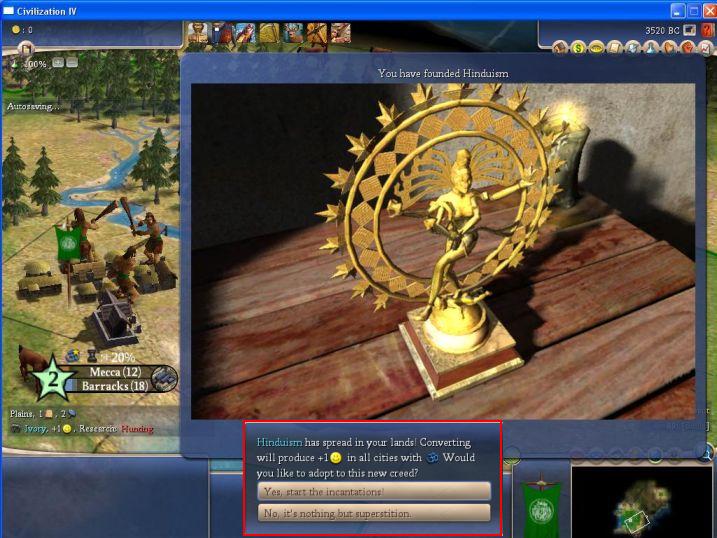 After getting the religious video (neat!), I then get a popup asking me whether I would like to convert to Hinduism. Since there's no reason not to do so - as a Spiritual civ, I don't even have to go through a turn of anarchy! - I go ahead and do so. Now the big question on everyone's mind has got to be, what does religion actually do in Civ4? Well, it does a couple of important things:
1) Any city with your state religion in it produces 1 culture per turn. The holy city of your state religion also produces an impressive 5 culture/turn. Spreading your religion around is thus a good way to expand borders early on in the game.
2) Cities with your state religion in them get +1 happy face, which allows them to grow one size larger (more on this later).
3) Cities with religion in them can build religion-specific buildings like temples and cathedrals. No religion, and you can't build a temple!
4) Similarly, since a temple is a prerequisite for priest specialists, you can't create priest specialists without a religion either (more on city specialists later).
5) If you control the Holy City for a religion and get a Great Prophet, you can have him create the Shrine for that religion. The Shrine is a wonder that produces 1 gold/turn, every turn, for every city in the world that has that religion. If you've spread your religion around a lot, this can be a LOT of money!
6) Finally, religion has a huge amount of influence on diplomacy. Civs that share the same religion will tend to be friends; those with different religions will have real trouble getting along. In this game, I'll be trying my best to spread Hinduism around and reap some major shrine income down the road.

Now that I've discovered my first tech, what to pursue next? Let's look at the tech tree itself. (F6 is the hotkey, and there is also a button on the top-right of the main screen that leads to the same place.) 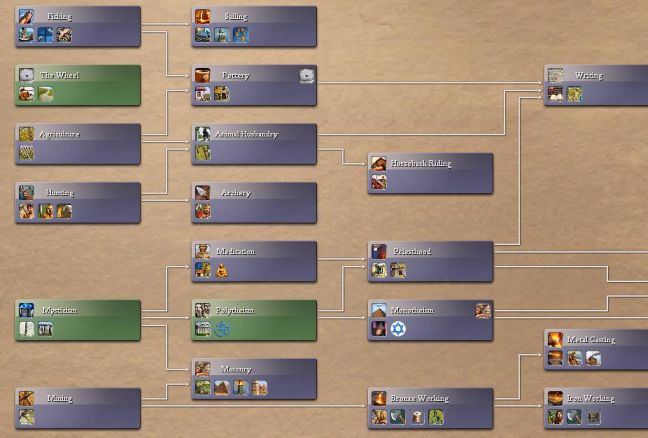 This will of course look very confusing for anyone seeing it at first, but with time it becomes easy to navigate, trust me. I started out with Mysticism and The Wheel because I was Arabia, and you can see that I've already researched and completed Polytheism. Now there are plenty of different options to pick here, but the most important thing for me to research at the moment is some worker techs so that I can hook up my nearby resources. Yes, you have to RESEARCH things like mining and farming in this game, your workers don't start with those abilities! It's possible to produce a worker early on in the game and literally have nothing for him to do since you haven't researched any of the worker techs yet!

Since we want to hook up the cows and horses near Mecca, the tech we want is Animal Husbandry. The fastest way to get there is to research Hunting, then go from there to Animal Husbandry (we could also start with Agriculture and then go on to Animal Husbandry, but I don't need Agricultre right away and it's a slightly more expensive tech). So Hunting it is, 5 turns of research at the moment.

Mecca has also hit size 2 this turn, and now that it's grown a size, I'm going to change its production. It currently has 7 shields invested into a barracks; those shields will be saved and stored for when I go back to the barracks later (this is of course different than how production worked in all previous Civilization games). I change production to a worker, which will take 12 turns to finish. Take a look: 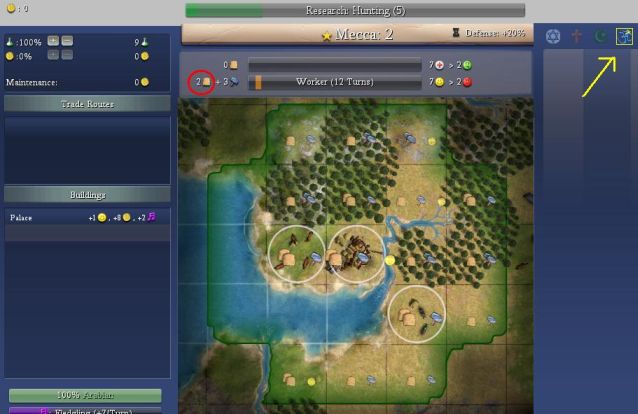 Workers and settlers are produced a little bit differently in Civ4. In past Civ games, they cost a certain amount of shields and dropped the population of the city upon completion. In Civ4, they don't drop the population of cities, but workers and settlers count both food AND shields towards their production. In other words, cities building either workers or settlers do not grow, since their excess food goes towards producing the units. Mecca here is adding its 2 excess food to help produce the worker. Since workers and settlers are a lot more expensive in Civ4 (60 shields and 100 shields, respectively) they are also both more valuable than they were in previous games too. Woe be it to someone who loses their first worker to a barb unit. So it will take us 12 turns to produce a worker, but that's actually pretty standard for this part of the game. Mecca's growth will take off once I get that worker out and build a pasture on the cows and horses. Also note that I arrowed the Hindu icon in Mecca; the little gold star indicates that it's the Hindu holy city.

Next: more exploration and early expansion of Arabia.